Remembering Chabi Biswas on his birthday. 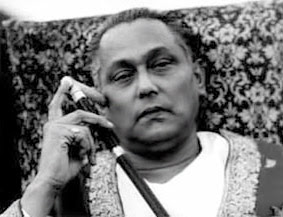 Remembering Chabi Biswas on his birthday.


Chabi Biswas was probably the greatest character artist Indian celluloid had ever produced. He has been remembered on his birthday on 13th July, 2010. His superlative class of performance had been acknowledged by brilliant directors like Satyajit Ray, Hrithik Ghatak, Raj Kapoor, Tapan Sinha, but he had remained unsung, unhonoured, unlamented.

Ray had a very serious personality and hardly required any improvisation as his innovative scripts had almost everything embedded in them. But Chabi Biswas brought out his own dimensions in the role of Feudal Lord in the film Jalsaghar. He combined the aristocracy and the dignity of the feudal lord in the colonial period and at times astonished Ray himself with his dynamic performances.

He even sold his wife’s ornaments to organize a musical program in his banquet room to maintain his dominance as a feudal lord. Singers from renowned classical gharana came and performed in the show and the entire village was invited to witness it. With the loss in revenue and poverty during British regime, he committed suicide by dying on horseback.

He was sublime in the film Debi, where he visualized Goddess Kali in the human form in Sharmila Tagore, his daughter –in –law. The entire concept was related to his belief and his son Soumitra took exception about the thing but was helpless. Sharmila became sick as it was awkward on her part to see his father-in-law touching her feet as she was believed to be Debi, the human form of Goddess.

Chabi Biswas was majestic in his classic role in the film Kanchenjungha. Ray experimented with a remote subject where the greatness of the Himalayas freed the mental blockade of middle-class bengalies. Arun Mukherjee, one of the unemployed youth even did not accept the job offered by big industrialist played by Chabi Biswas. At the end of the film Chabi Biswas realized the greatness of the great mountain range and surrendered before it. The film could not be understood by mass audience as it dealt with the concept of realization although the colourful photography of Ray in Darjeeling was well appreciated. But critics had acclaimed Chabi Biswas and said that he was the last name for the depiction of aristocracy in any form.

His dignified performance in the films of legendary directors like Ajoy Kar, Tapan Sinha, Prabhat Mukherjee, Agragami, Agradoot had not been forgotten by the mass. He had remained sublime in Prabhat Mukherjee’s Bicharak in the role of a charishmatic advocate, Tapan Sinha’s Kabuliwala in the role of an Afghan father, Ajoy Kar’s Suno Baranari in the role of a wealthy Barrister, Agragami’s Headmaster in the role of an old headmaster, to name a few. He died in a tragic accident in 1962 and Indian celluloid lost one of its greatest actors ever. His films should be preserved for projection of dynamism, class, dignity, aristocracy and majestic demeanour.
Posted by Souvik Chatterji at 2:34 PM