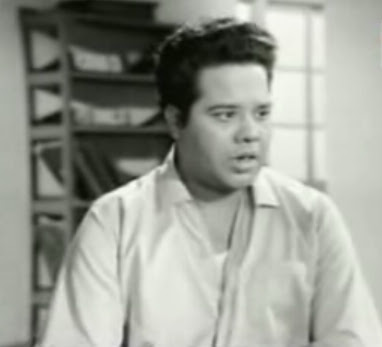 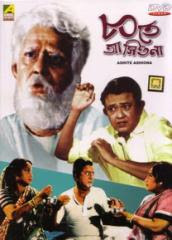 Bhanu Banerjee in the 60s gained immense popularity in the Bengali celluloid. Ashite Ashiona was released in the mid-60s with a subject related to dreams. Bhanu Banerjee was eighty years old person who was ill-treated by his sons and daughters – in –law. His wife Ruma Guha Thakurta was seventy years old.

He dreamt that he went for a change to a village named Nagtara. He went with his servant played by Jahar Rai. There he swam in a pond owned by Tarun Kumar. After bathing out he regained his youth. He shaved and returned back to his house. Tarun Kumar took the sample of the water to the Chief Chemists and asked him to test it. Then he dropped an old street dog in the water, which attacked all the chemists. The chemists informed the UN Authorities about the pond.

Bhanu returned back home, but before his elder son Kamal Mitra or second son Asit Boron forcibly made him sign the pond in favour of them, brought Ruma Guha Thakurta to the village. All the old persons of that village flocked near the pond to bath in that water. Robi Ghosh, Gangapada Badu and other authorities created a barbed wire around the pond.

Johor Roy, the servant of Bhanu created a lever by which she threw Ruma like a rocket and she immersed in the pond and returned back as young girl. Robi Ghosh drowned more than six types in the pond and reduced in size. When the police chased Bhanu and Ruma, they tried to escape and ended up being arrested by the police. Bhanu opened his eyes and found that he was dreaming and he stilled remained eighty years old person.

The music in the film composed by Gopen Mallick was fabulous. Manna Dey’s songs “dub diye jao” and “Jodi akaksh hoto” became super hit. As usual Bhanu Banerjee gave brilliant lips in the film. Ruma did well in the role of the old lady. Tarun Kumar as usual contributed well in Bhanu’s film. The supporting actresses like Renuka in the role of the wife of Kamal Mitra did well. Jahar Roy, Shyam Laha and Shital Banerjee did well in their respective roles.

The film should be preserved for the unique subject that was dealt with, that is regaining youth, which everyone in the world strives for.
Posted by Souvik Chatterji at 8:42 AM