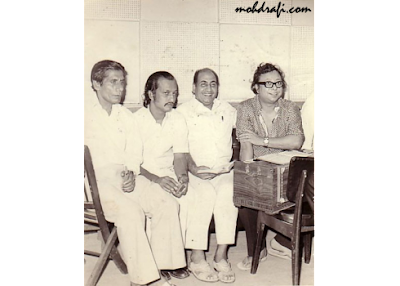 The nation remembers Pancham, better known as Rahul Dev Burman, on his birthday on 27th June, 2009. Almost 15 years passed after his death, yet his tunes had kept him alive among the young generations.

Being the son of legendary singer and composer SD Burman, he had a monumental task of proving his identity in the 60s. He came out with innovative tunes sung by Rafi in Mehmood’s film Chote Nawab. From that time onwards critics understood that RD Burman had come to create his unique identity. His biggest in the 60s came in Shammi Kapoor’s film Teesri Manzil in 1966. All the songs sung by Rafi and Asha became landmark hits including “o haseena zulfonwali”, “aaja aaja mai hoon pyar tera”, “janeman janejaa”, etc. Along with western composers like Shankar Jaikishan, OP Nayyar, Salil Choudhury, who were ruling the industry, RD Burman kept his feet on strong platform.

RD Burman and Rafi combination continued in films like Abhilasha with songs like “wadiyan tera daaman”, Jeetender’s Karwan with songs like “kitna pyara wada”, “are chadti jawani”, “are ho goriyan kahan tera des re”, Shashi Kapoor’s Pyar Ka Mausam, with songs like “tum bin jayun kahan”, “ni sultana re”, Rajesh Khanna’s The Train, with songs like “gulaabi aankhe”, “tujshe bhala yeh”, etc. In the 70s, RD took the bollywood industry by storm. With death of Jaikishan, Roshan, Ghulam Mohammad, Vasant Desai, etc., the industry depended on Pancham, Laxmikant Pyarellal and Kalyanji Anandji for best music. They provided stability to the industry for the next 15 years.

He won the filmfare award for the best composer three times. The young generations associate themselves with RD’s tunes even today, in that count he was one of the versatile composers after Shankar Jaikishan, Naushad, Madanmohan, Roshan, etc.
Posted by Souvik Chatterji at 8:29 AM