Yamla Pagla Diwana had got a good opening. 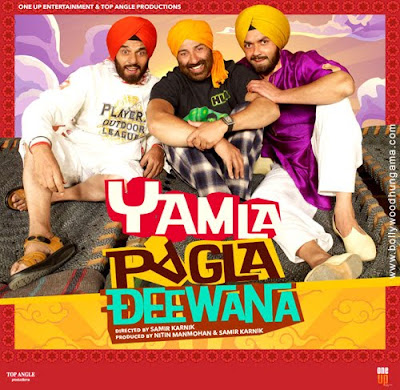 Yamla Pagla Diwana had got a good opening.

The film Yamla Pagla Diwana had got a very good opening. Dharmender and Sunny Deol had a brilliant box-office presence in bollywood films for the last 50 years. So any film where both appeared together is destined to do well. The film had been directed by Samir Karnik. The title of the film was inspired from the 1975 Dharmender’s film Pratigya’s landmark song. The song was titled “mai jaat yamla pagla diwana” which was sung by legendary singer Mohammad Rafi, where Rafi had almost imitated the dialogue delivery style of Dharmender.

This is another film where the entire Deol family had acted together after Apne. Dharmender, Sunny Deol and Bobby Deol had acted in the film. The film had been released on 14th January, 2011. Sunny Deol played the role of an NRI family person who lived in Vancouver, Canada. He stayed there with his mother played by Nafisa Ali and wife.

He missed his father played by Dharmender and brother played by Bobby Deol, who were segregated because Dharmender lived the life of a criminal. Sunny Deol went to India to bring back his younger brother, as his mother was too attached with the child and wanted to see him. Sunny Deol came to Varanasi, and was cheated in a Money Exchange Office. When he saved Dharmender and Bobby Deol from a group of gangsters who attacked them due to cheating, both his father and brother came close to him.

Bobby Deol had an affair with Kulraj Randhawa. But her elder brother Anupam Kher wanted to get her married to an NRI. But he was interested to marry his sister to Sunny Deol, not Bobby Deol. In the meantime Anupam Kher contested election from a constituency in Punjab. Due to the mess relating to marriage of her sister, Sunny Deol’s wife came all the way from Canada. At the end the chaos was sorted out and Bobby Deol got married to the sister of Anupam Kher. Sunny kept his promise and took the entire family back to Canada.

The performances of the most of the artists in the film was excellent including Sunny Deol, Bobby Deol, Nafisa Ali, Dharmender, Anupam Kher and others. The music of the film composed by a group of composers like Anu Malik, Sandesh Sandilya, Rahul Seth, Sanjoy Choudhury was very entertaining. The songs like “yamla pagla diwana” sung by Sonu Nigam and Nindy Kaur, “charha de rang” sung by Rahat Fateh Ali Khan and Sweta Pandit, had very popular. The comedy timing of most of the performers were excellent and the director requires credit for utilizing the talents of the actors and actresses.

The film had earned more than 22 crores in the first week and is destined to become a hit film. Viewers should watch the film.
Posted by Souvik Chatterji at 6:30 PM