Looking back at combination of OP Nayyar and Mohammad Rafi. 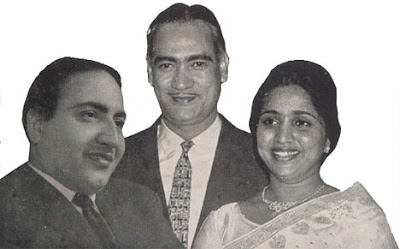 Looking back at combination of OP Nayyar and Mohammad Rafi.

The musiclovers had remembered legendary composer Omkar Prasad Nayyar, popularly known as OP Nayyar on his birthday on 16th January, 2011. He had died few years back, but his tunes had remained immortal for the audience of bollywood films for years. Whenever the name of OP Nayyar appeared in the minds of the audience, the name of immortal singer Mohammad Rafi had come together, without whom OP Nayyar was incomplete. OP Nayyar started his career with the film Kaneej in 1949.

Guru Dutt had created his image in bollywood films in different categories being a thoughtful director and producer, dynamic actor, good choreographer. One of the numerous reasons for which his films became super hit in the 50s and 60s included the brilliant songs sung by Rafi during the golden age.

Rafi’s songs in Guru Dutt’s Aar Paar, released in 1954 and composed by OP Nayyar became super hit. It was followed by Mr and Mrs. 55 released in 1955. Songs picturized on both Guru Dutt and Johnny Walker had melody and sweetness. Rafi’s songs like “dil pe kiya aisa jaadu”, “muhobbat karlo aji karlo”, “sun sun sun sun zaalima”, composed by OP Nayyar, created landmark in the mid-50s and Rafi emerged as the greatest singer of bollywood films during that time. In many of the songs Geeta Dutt did a great job in duets sung along with Mohammad Rafi.

Joy Mukherjee’s film Ek Musafir Ek Hasina did brilliant business in the early 60s. Raj Khosla’s musical thriller released in 1962 addressed every section of the society with romantic performance of Joy Mukherjee and Sadhna. All the songs of Rafi and Asha picturized on Joy Mukherjee and Sadhna became super hit. It includes songs like “aap yuhin agar humse milte rahe”, “mujhe dekhkar aapka muskurana”, “phir tere shahar me”, “mai pyar ka rahi hoon”, “bahut shukhriya, bari meherbani”, “humko tumhari isqh ne”, to name a few. Rafi was elegant as ever in the songs “phir tere shahar me” and “humko tumhare ishq ne”. OP Nayyar was probably at his best in the film and his blend of eastern and western music created the romantic mood for the film.
Joy Mukherjee, Rafi and OP Nayyar’s magical combination continued in the film Phir Wohi Dil Laya Hoon. Most part of the film released in 1963 was shot at picturesque locations of Jammu & Kashmir and the landscape was as romantic as the songs sung by Rafi and Asha in the film. The prominent songs included “banda parwar, thamlo jigar”, “lakho hai nigahon me”, “nazneen bara rangeen hai wada tera”, “aanchal me sajalena kaliyan”, “zulf ke chayon me chehere ka ujala lekar”, to name a few. Rafi had shown his excellent classical skills in the songs “zulf ke chayon me”, and “aancal me sajalena kaliyan”. Asha Parekh showed her dancing skills to perfection in the film. Rajender Nath played the role of the relief character in the film. In fact OP Nayyar maintained the same standard of music in Shammi Kapoor’s film Kashmir Ki Kali and Biswajeet’s film Mere Sanam which were made after Phir Wohi Dil Laya Hoon.
Joy Mukherjee’s combination with OP Nayyar continued in the film Humsaya. In that film Sharmila Tagore got the lead role opposite Joy Mukherjee. By that time due to emergence on new actors and actresses in bollywood films, Joy Mukherjee’s popularity declined and the film also did moderate business. In respect of the songs, Rafi’s song “dil ki awaaz bhi sun” became hit. But OP Nayyar gave a number of songs to Mahendra Kapoor was well which did not strike gold in the box –office.

One article is too small to explain the domination of OP Nayyar and Mohammad Rafi in bollywood films of the 50s and 60s. But the songs and the films had not become obsolete and listeners can listen to them again and again. The songs and the films should be restored.
Posted by Souvik Chatterji at 1:50 PM