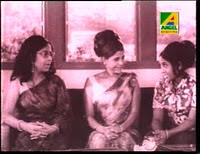 Gita Dey had acted in more than 200 bengali films in a span of 60 years. She was brilliant in her stage performances that spanned over 60 years. She had learned acting from Natyacharya Sishir Bhaduri and directors experimented to their limit with Geeta Dey due to her depth acting. She had played every type of role including villainish roles, serio-comic roles, tragic roles, etc.

She remembered the most for her epic performance in director Hrithik Ghatak’s award winning film Meghe Dhaka Tara. She played the role of mother of Anil Chatterji and Supriya Choudhury. She also acted in other landmark films of Ghatak including Komol Gandhar and Subarnarekha. She was sublime in Satyajit Ray’s award winning film Samapti, one of the three stories titled Teen Kanya.

Along with classic films she acted in numerous mainstream films like Abhaya Srikanto directed by Haridas Bhattacharya, Prothom Pratisruti directed by Dinen Gupta, Phuleshwari directed by Tarun Majumdar, Shilpi directed by Agragami, Mouchak directed by Arobindo Mukherjee. She was unblemish in her performance in the Television Serial Subarnalata. She played the role of Muktakeshi, the mother-in-law in the serial.

The films, works of Geeta Dey and songs of Pintu Bhattacharya should be preserved and restored.
Posted by Souvik Chatterji at 10:15 AM