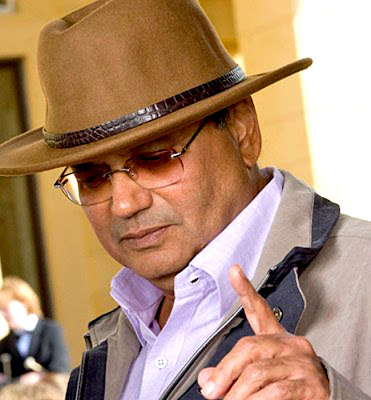 His film Karz was based on story of reincarnation of Rishi Kapoor who had been killed by Simi Garewal in his previous life. He identified his mother and sister and unfolded the truth relating to the murder by Simi Garewal. Subhas Ghai was successful to motivate LP to create landmark tunes in the film with Rafi’s song “darde dil” and Kishore’s song “om shanti om” becoming landmark hits in the early 80s. Karz was remade in the recent past with Himesh Reshamiya playing the role of Rishi Kapoor. But the magic of Subhash Ghai’s Karz could not be repeated again.

His film Karma had a subject related to terrorism. Dilip Kumar was the jailor whose family was killed by the terrorist gang led by Anupam Kher. He was imprisoned in the respective jail of Dilip Kumar and took revenge by escaping from the prison and killing his family members. Anupam Kher’s performance opposite Dilip Kumar changed the shape of his career and he became landmark villain in the following years. Dilip Kumar created a force with criminals like Anil Kapoor, Jackie Shroff and Nasiruddin Shah who were facing imprisonment. They helped him in his fight against terrorism and the mission was successful.

Subhash Ghai’s film Khalnayak was based on the creation of an offender by the evil forces. Sanjay Dutt was compelled to become a criminal and joined the criminal gang. He was arrested by Jackie Shroff and he fled from the prison. Madhuri Dixit the wife of Jackie Shroff helped him to catch Sanjay Dutt at the end of the film.

Subhash Ghai also experimented with legendary actors like Dilip Kumar and Raj Kumar in the film Saudagar. He had the guts to experiment with new actor and actresses and many of them rose to stardom with the start given by Subhash Ghai. Manisha Koirala started her career with Khalnayak and later on became a successful actress of the 90s.

His other successful films include Kalicharan with Shatrughun Sinha, Yadein with Hrithik Roshan, Hero with Jackie Shroff, Taal with Anil Kapoor. Very significantly the music in the films of Subhash Ghai had been extremely successful and LP had played an important role in composing music for his films. Last year Subhash Ghai made Yuvvraaj with Salman Khan, Katrina Kaif and Anil Kapoor. The film did not do great business but the music composed by AR Rehman stole the hearts of the audience. All the songs became super hit including “tu muskura”, “shano shano”, etc. Subhash Ghai was instrumental in giving opportunity to new talents in the world of singing like Benny Dayal, Javed Ali in the film Yuvvraaj. Viewers will always remember Subhash Ghai for giving scope to newcomers who had always became great stars in bollywood in future like Madhuri Dixit, Manisha Koirala, Jackie Shroff, to name a few. The list can go on. The viewers expect him to continue the good work and create better films in future.
Posted by Souvik Chatterji at 9:27 AM