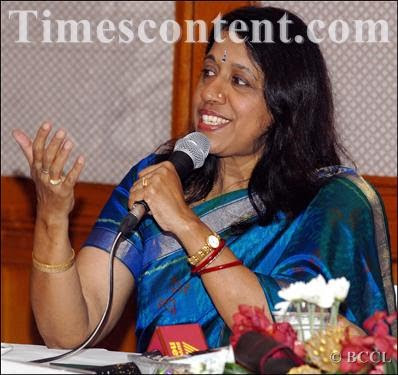 The listeners of film music in India wish happy birthday to successful singer Kavita Krishnamurthy on 1st January, 2011. She had been a sensation in the field of music for last 25 years. The viewers of Zee Bangla remember her appearing in Sourav Ganguly’s Dadagiri program on 21st October, 2010.

Sourav Ganguly brought singing superstars in Dadagiri on 21st October, 2010. He had brought many superstars, both Bengali and national superstars in the program a number of times.

On 21st October, he brought Kavita Krishnamurty, Debojyotida (Salil Choudhury’s assistant), Shaan, Shovam, Kunal Ganjawala and Mitali Singh (wife of Bhupinder Singh) in the program. Kavita Krishnamurthy sang the rabindrasangeet “sakhi kamona kahare bole” from the film Shreeman Prithviraaj in style. She also sang “pyar hua chupke se” from 1942 A Love Story brilliantly. Kavita Krishnamurthy said that her original name was Sharda. But just became singer Sharda who was associated with composer Shankar Jaikishan was famous during the early 70s, she was asked to change her name to Kavita by singer Hemant Kumar. She changed it and created an identity of her own.

Mitali Singh shared the experience of Bhupinder Singh with RD Burman. Both were friends and sometimes due to the friendly quarrel between the two the singer Asha Bhosle had to wait for sometime while a show was in progress. She admitted that her husband Bhupinder Singh had a distinct bass and tone and listeners admired it. She also disclosed that she was from Maymanshingha in Bangladesh. It was music which brought her and Bhupinder Singh together.

Shaan and Shovam had been friends and during the show they enjoyed the communication of one with the other. Shaan sung the song “musumu suhasi” very well. Shovam sang his song. Kunal Ganjawala won the quiz at the end. He sang the song “bheege hoont tere” in style. Debojtoti Babu played the violin in style and played the song “kahin dur jab din dhal jaye” composed by Salil Choudhury in the film Anand.

Sourav Ganguly was brilliant as a host and kept all the celebrities in good humour. Viewers expect Sourav Ganguly continue his great work of bringing together giants from different spheres of life in Dadagiri program in Zee Bangla.

Kavita Krishnamurthy had made listeners spellbound with her brilliant performance in the film Khamoshi. Her song “aaj mai upar” had made listeners sleep. Singers of the new generation should learn from her humility. She should continue her great work and enrich bollywood music with her sweet voice and classical orientation.
Posted by Souvik Chatterji at 2:02 PM