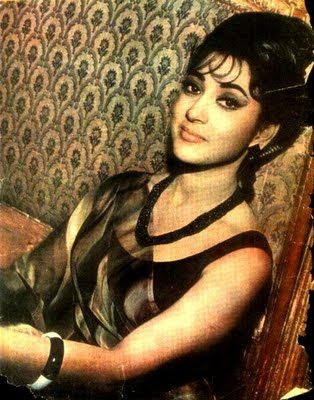 Mala Sinha contributed well in Guru Dutt’s classic film Pyaasa. The romantic andaz displayed by Mala Sinha was very significant in the film in the songs “hum aapke aankho me”, sung by Rafi and Geeta Dutt. Mala Sinha continued her dream run in the 60s by performing in historical films like Jahanara opposite Bharat Bhushan. The film was a musical block buster. The songs “baad muddar key eh ghari aye”, “kisi ki yaad me”, etc., composed by Madan Mohan created history. The biggest achievement of Mala Sinha lies in sustaining in bollywood industry amidst high competition from other leading actresses like Nargis, Meena Kumari, Madhubala, Vaijayantimala, etc. Mala Sinha was brilliant in the film Gumrah opposite Ashok Kumar and Sunil Dutt. She displayed her personality very well in a triangular love story. The songs of the film composed by Ravi was brilliant including “chalo ek baar phir se” and :in hawawon mai” sung by Mahendra Kapoor.

She even featured in modern films in the 90s like Khel where she had played character roles opposite Madhuri Dixit. The viewers expect her to continue in character roles in films in future.
Posted by Souvik-indrajalik at 5:31 PM