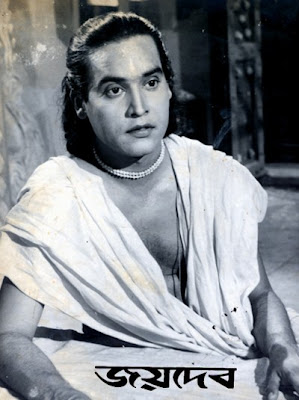 Asitboron was the most enterprising hero of Bengali films before Uttam Kumar ruled the industry. He had various qualities like singing, playing the table, etc. He created a permanent position of prestige in the minds of producers and directors with his devotional performance in the film Joydev.

At that time Robin Mojumdar was the main hero of Bengali films. As Robin Mojumdar was both a singer and an actor the producers used his talent to perfection in the films like Bhangagara, Jogajog, Kobi, etc. But Asitboron was smart, handsome and in urbanized roles became the automatic choice of the modern directors. His film Kar Pape stormed Bengali industry in the early 50s. The film was made with a bold subject of Asitboron being infected with syphilis and the contagious disease was spread his wife Manju Dey. Chabi Biswas, the doctor in the film warned Asit Boron not to marry any one before the disease was fully cured. He did not listen to him and the disease spread to Manju Dey. At the end of the film Manju Dey fired Asitboron when he went to marry another girl. The powerful performance of Chabi Biswas and Manju Dey stands out as one of their most dynamic performances of any performer in Bengali films.

Asitboron was sublime in the role of Mathur, in the film Rani Rashmoni. He was the son-in-law of Malina Debi, and educated during Colonial period. His western thoughts did not allow him to believe that Sri Ramkrishna was an avatar. But he was convinced by Malina Debi at the end of the film. Asitboron did extremely well in the role of Munsef in Uttam Kumar’s film Khokababur Protyaborton. It was based on the epic literature of Tagore, and Asitboron expressed the relationship of a master with his servant to perfection during the relevant period.

Asitboron played the role of famous kabiyal Bhora Moira, in Uttam Kumar’s film Antony Firingi. He contested against him in the musical competition where Antony Firingi defeated him. His performance in Tapan Sinha’s film Harmonium also requires special mention. He played the role of a Zaminder whose harmonium was sold in auction by his daughter Arundhuti Debi, and after the harmonium changed different hands it was resold back to Arundhuti Debi, at the of the film.

His other famous films include Bondhu opposite Mala Sinha, Brotocharini, Badhu, Shilpi, Sriti Tuku Thak opposite Suchitra Sen, to name a few. He had a number of basic discs in his own voice, too. He had acted in more than 100 films in a span of 30 years. It is really sad that he died unwept, unsung, unlamented and unrecognized. The viewers forgot his contribution in Bengali films during the pre-Uttam Kumar period when his effortless performance attracted the urbanized youth of the early 50s. His films should be restored and preserved.

My father Ex. Chief Public Prosecutor, Bankshall Court, North, met Asitboron near Glass House in Paikpara (North Kolkata) in the early 50s, when he used to come for playing tennis with actress Manju Dey, and fishing activities in a lake where the modern Metro Rail is situated near Dum Dum Station. Asitboron disclosed to my father that Uttam Kumar once told Asitboron that kaloda (that was his nickname), can you lend me your walking style. Later Uttam Kumar developed his own walking style which was imitated by many heroes of contemporary period.
Posted by Souvik-indrajalik at 10:10 AM