On Mahalaya Bengalies all over the world listen to Mohishashur Mordini in All India Radio. 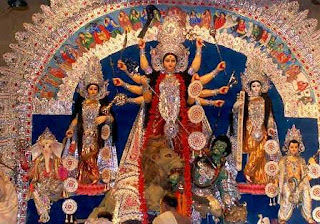 On Mahalaya Bengalies all over the world listen to  Mohishashur Mordini in All India Radio.

Mahalaya held every year, marks the beginning of Durga Puja all over the world. For bengalies in Mahalaya pritripakha ends, debipakha begins. On the same day, people go to the holy ganges to do tarpan, that is pay respect to the departed souls of father and ancestors. Different types of tarpans are done on the day including pitri tarpan, matri tarpan, deb tarpan, etc.

Durga Puja is the puja of Asurdalani Maa Durga, who had defeated the evil forces (mahashahura) and brought peace and solidarity in the earth. All India Radio had a played a very important role in depicting the story of Mahalaya every year in the early morning.

The other great part of Mahishashur Mordini was the great songs sung by legendary Bengali singers of the golden age, namely “taba achinto “ sung by Manobendra Mukherjee, “jago tumi jago” sung by Dwijen Mukherjee, and many songs sung by Sandhya Mukherjee, Suprava Sarkar, Supriti Ghosh, Shyamal Mitra and other legends.
These days a lot of programs are held in television to depict mohishashur mordini in television. For example in Zee Bangla channel on 15th October, 2012, Srabanti Chatterjee and Shubhashree are going to play the role of Sati in Satir Ekanno Peeth in the play  related to Mahishashur Mordini. But the importance of mohishashur mordini in All India Radio cannot be replaced. It is a historical piece of creation and should be restored.

In the new durga puja in 2012, it is expected that everyone in every part of the world should enjoy Durgapuja in their own way.

Posted by Souvik Chatterji at 4:50 AM