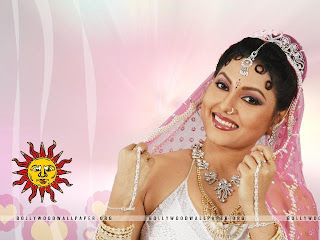 A scene of Bengali cinema Chaddabeshi was shown. The scene was related to Bikash Roy’s testing of Uttam Kumar regarding his under knowledge of Bengali language. The question was what was the name with which Bikash Roy called Uttam Kumar. Madhumanti gave wrong answer. The correct answer was Bhajahari. The actual name of Uttam Kumar in the film was Gourhari.

Another scene was shown from the bollywood film Munnabhai MBBS. In that film a scene was shown where Sanjay Dutt was speaking with Boman Irani. Boman Irani asked Sanjay Dutt whether he did meet his daughter. The question was how many times the name of his daughter was uttered. The answer would have been 2 times. Indrani Dutta gave the right answer.

Both Indrani Dutta’s family and Madhumanti’s family did well in the Bong Anubad round and the other rounds. Prasenjit Chatterjee anchored the program very well.
Posted by Souvik Chatterji at 7:51 AM