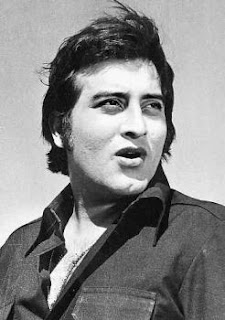 After launching his son Akshay Khanna in the film Himalay Putra, Vinod Khanna switched to character roles and got busy with politics. He also joined the Rajnish Ashram in the early 80s. In 2009, he was very impressive in Salman Khan’s super hit film Wanted where he played the role of his father. In 2010, again he played the role of the father of Salman Khan in the blockbuster film Dabaang. Although he died at the end of the film, his soft performance was appreciated by the audience. His sharpness in respect of acting had not withered away and he just like Amitabh Bacchan had matured into a more composed actor. In 2012 he acted in the film Players with Abhishek Bacchan, Bobby Deol and others. The viewers expect him to continue the brilliant work in the years to come.
Posted by Souvik-indrajalik at 8:13 AM