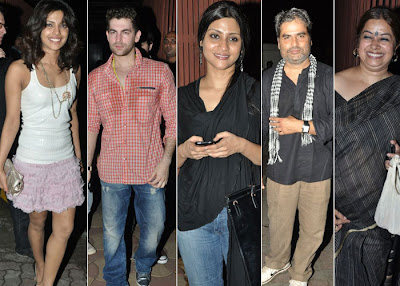 Inspite of very unique subject matter of Saat Khoon Maaf the film had an average opening. It collected around 13 crore rupees in the first week. May be the commencement of World Cup cricket had diverted attention of the viewers. Vishal Bharadwaj’s film Saat Khoon Maaf has a very innovative story. The film is based on the story Susaane’s Seven Husbands written by Ruskin Bond. Priyanka Chopra played the lead role in the film. She had shown courage to act in a negative character, a wife who had been alleged to commit the murder of seven husbands.

Then Priyanka married Irfan Khan who played the role of a poet. She was irritated with the behavior of Irfan Khan at night which was different from how he behaved during the day. The name of the story was “musafir hoon yaaron”. He too died. Priyanka then married a Russian called Aleksander Dyachenko. The name of the story was “amar prem”. He died too.

All the performers did a great job including Priyanka Chopra, Naseeruddin Shah, Annu Kapoor, Irfan Khan and others. Although the opening had not been upto expectation the film should do great business in the long run.
Posted by Souvik Chatterji at 9:27 PM