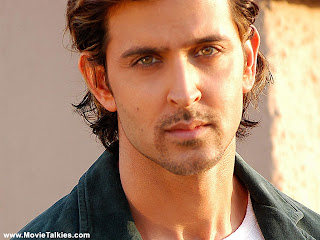 The viewers of bollywood films wish happy birthday to superstar Hrithik Roshan on 10th January, 2012. He has been considered as one of the greatest style icons of India and probably the most dynamic actor ever to grace Indian silver screen. In 2010, he won the award for the style icon  in Lux Sabse Favourite Kaun award.

2012 will be a very important year for him. His film Agneepath is going to be released in January itself. He acted in the same role which Big B had played 20 years back. He had acted opposite Sanjay Dutt and Rishi Kapoor, so viewers are curious to see his performance in the film. He is also working on the film Krrish 2 which is going to be released at the end of the year.

When he appeared in his father Rakesh Roshan’s project Kaho Na Pyar Hai in 2000, he broke all types of records that were set up in Indian cinema in respect of revenues derived from successful films. He played a double role with the title Rohit as an Indian and Raj as a Kiwi citizen. The smartness and elegance that he showed in the Kiwi character was unparallel considering the capability of all the leading superstars of the country. He acted opposite Amisha Patel who was also sublime in the film. Last but not the least his dancing capability was appreciated by every section of the crowd, especially in songs like “pyar ki kashti me”, “kaho na pyar hai”, “haseeno ki mehfil”, etc.

But after the success in Kaho Na Pyar Hai, his off-beat films like Fiza and Mission Kashmir did not get proper response from the crowd. He gave spirited performance opposite Karishma Kapoor in Fiza and Preeti Zinta in Mission Kashmir. In fact he dared to even act in a negative character in the film Mission Kashmir opposite Sanjay Dutt in the early part of his career, which other actors of his age would not have dared to do. He gave adequate lips in the song “bhumaro bhumaro” in Mission Kashmir.

After a series of medium budget films like Mai Pyar Ki Diwani Hoon, he again stormed box-office with the success of his film Koi Mil Gaya. He received the filmfare award for the best actor again with dynamic performance in the role of a mentally retarded person. The film was shot in by director Rakesh Roshan and Preeti Zinta and Rekha did very well in their respective roles. The relationship with Aliens was well expressed by Hrithik Roshan.

He again received filmfare award for best actor in the film Dhoom 2. Again he acted in a negative character in the form of international thief. He became notorious for his planned stealing operations in partnership with Aishwarya Rai. His deeds or misdeeds were detected by the intelligent investigator played by Abhishek Bacchan. He left him without charges after Hrithik transferred the stolen property to Abhishek Bacchan. Hrithik Roshan showed some acrobatic stunts which only actors could have taken in the film. The dance performance in the song “dhoom machale” was brilliant by international standards.

Hrithik Roshan made the viewers speechless with his dynamic performance in the film Krishh. He acted opposite Priyanka Chopra and exhibited the supernatural powers that he inherited from his father who received them from aliens. The scenic beauty of South East Asian countries amazed the viewers along with the performance of Hrithik Roshan.

In 2008, Hrithik Roshan’s brilliant performance in the role of Mughal Emperor Akbar astonished the viewers. He complimented the dynamic performance of Aishwarya Rai in the film Jodha Akbar which was first blockbuster of 2008. He won the filmfare award for the best actor in 2009 for best performance in Jodha Akbar. His other hit films included Laksh, Kabhi Khushi Kabhi Gham, etc.

Indian viewers are not that much fond of westernized performances, otherwise with the multitalented approach to films, Hrithik Roshan would have dethroned Shahrukh Khan from the Number One position long time back.

Viewers waited for the 2 grand releases of Hrithik Roshan, namely Kites and Guzarish in 2010. Both the films did not do well in the box-office. If Spanish version being inadmissible and ununderstandable to rural mass of India was the root cause for average business of Kites, lack of interest towards serious films on the part of the audience may have effected Guzarish. But Hrithik Roshan acted well in both the films.  Even with limited success, the viewers expect Hrithik Roshan to continue his good work and do even better in the years to come.

Posted by Souvik Chatterji at 7:17 AM