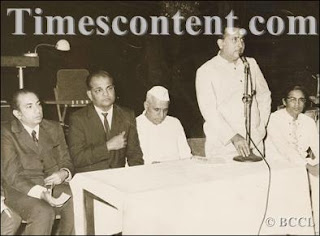 The listeners of music all over the world wish happy birthday to Mahendra Kapoor on 9th January, 2012. Few years ago the great singer had left the listeners. But he is alive in his numerous brilliant basic discs and film songs.

He came to limelight in bollywood music with the resemblance of classical singer Mohammad Rafi. In fact Rafi is the idol and guru and Mahendra Kapoor learned singing from the musical giant. Mahendra Kapoor became a big contributor in BR Chopra’s films in the 50s and 60s. In Rajender Kumar’s film Dhool Ka Phool Mahendra Kapoor’s songs were very successful.

During that period, Mahendra Kapoor sang a brilliant Bengali modern song “ekti e raat katena” which made viewers spellbound. The song had pathos feeling, romantic appeal, classical touch everything embedded in it. He was unblemish in Sunil Dutt’s film Gumraah released in 1963. His song “chalo ek baar bhir se” became super hit in the early 60s. Composer Ravi had composed many brilliant tunes for Mahendra Kapoor in his illustrious career which included the songs “neele gagan ki tale” in the film Humraaz for which he received filmfare award for the best singer, “in baharon me in ghatayon me tujhko mera dil pukare” in the film Gumraah to name a few.

Mahendra Kapoor started a new innings with Manoj Kumar’s film Upkaar. He sang numerous number of patriotic songs for Manoj Kumar including “rang de basanti chola” in the film Shahid, “mere desh ki dharti “ in the film Upkaar, etc. He contributed in films like Purab Aur Paschim, Roti Kapda Aur Makaan, Kranti, etc.
It is not possible to highlight the contribution of Mahendra Kapoor who had contributed in bollywood films for more than 40 years in a small article. Numerous listeners miss Mahendra Kapoor but remember him in his melodious songs. His songs and films should be restored.
Posted by Souvik Chatterji at 1:17 PM