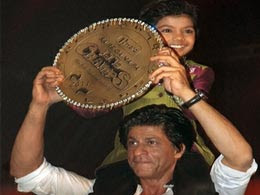 On the same day, superstar Shahrukh Khan had come to promote his new film Ra One. He announced the champion of Zee TV Saregamapa Little Champs Program. He mentioned that Azmat Hussain had got the maximum number of votes and won the championship defeating both the other finalists Salman Ali and Nitin Kumar.The previous participants came and sung songs including Niladri Chatterjee.

Very significantly Azmat Hussain had been the youngest of the finalists and at an age of 10 years had defeated the other finalists who were more than 3 years older than him.

The entire program continued for more than 3 months. The three judges Adnan Sami, Kailash Kher and Javed Ali require special appreciation for grooming all the child participants during these 4 months. They taught the children how the singing could be developed. All the guests invited require huge appreciation including Anna Hazare, Ramdev Maharaj, Usha Utthup, Salman Khan, Shahrukh Khan, Mika Singh, Pyarellal and others. They sacrificed their busy schedule to come and cheer up the child participants. In totality, Zee TV Saregamapa Little Champs Program in Zee TV had been an absolute success.
Posted by Souvik-indrajalik at 8:45 AM