The Japanese Wife is quite an Abstract Film. 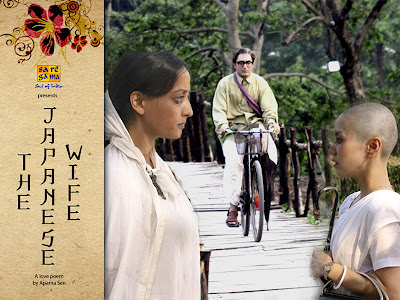 The Japanese Wife is quite an Abstract Film.

Aparna Sen had experimented with Kunal Basu’s story in her film The Japanese Wife. The story of the film is very abstract.

In the film Rahul Bose and Chigusa Takaku were pen friends who exchanged wedding vows through letters. They did not meet each other within 15 years, yet their attachment towards each other remained intact.

The relationship faced challenge when a young widow played by Raima Sen with a small child came to stay with Rahul Bose. Rahul Bose a teacher in Sunderbans and cared for the rural population of the place.

He cared for his unseen Japanese wife as well. When he came to know that she was ill with cancer, he took leave from his school to find a cure for the ailment. But later when the entire village was infected with malaria, he got infected too. He died at the end.

His Japanese wife came to the village in white saree, the symbol of a widow. The performances of Rahul Bose, Raima Sen and Chigusa Takaku were excellent. Moushumi Chatterji also did well in her respective role.

The music of Sagar Desai was soft and meaningful. Aparna Sen used the camera to perfection. But the trouble with these films lies in the ability of the viewers to accept it. Firstly the development of romantic relationship between a man and a woman through letters in the 21st century is very much imaginative.

Life had become so fast in the last years , that the impulses of slow moving personalities can reach the viewers to boredom. The story had very strong human values embedded in it, and the direction of Aparna Sen had been brilliant, but going by the record of realistic films in the last 5 years, it does not seem like being a crowd-puller in the real sense.

Even then it was a brilliant effort on the part of Aparna Sen to choose such a subject and do justice with it.
Posted by Souvik-indrajalik at 11:19 AM

thnks for the breif souvik... i so wana watch this movie...