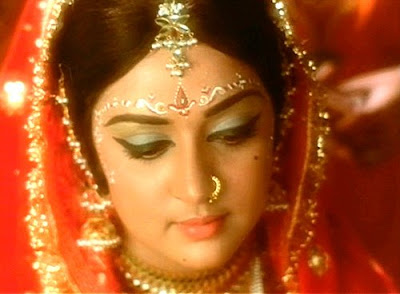 Hema Malini is one of the few legendary dancers of bollywood who has created an institution of their own by providing memorable performances in the 70s and 80s. She had acted in films directed by different types of directors including Ramesh Sippy, Gulzar, etc.

Her performance opposite Raj Kapoor in the film Sapno Ka Saudagar, in the early part of her career was well appreciated by the audience. In that film Raj Kapoor used to create illusions in the minds of people and say that the dreams will come true. She supported this simple man with an amazing vision. In the early 70s she got a double role in Seeta aur Geeta, where one of the sisters was ill-treated by her relatives and exploited to get the regular income derived from the ancestral property kept by her parents and the other sister took revenge against the oppression. The film was directed with a serio-comic dimension with Sanjeev Kumar and Dharmender doing justice to their respective roles. She had also done well in Johny Mera Naam, opposite Dev Anand, and Gora Aur Kala, opposite Rajender Kumar. In 1975, Hema Malini acted in the most successful film of her career titled Sholay. Most of the characters of the film had become immortal and the names of the characters are memorised by the viewers for generations, including her character Basanti. She also displayed her powerful dancing skills in the songs “jab tak hai jaan”, “holi ke din” etc. Her comedy performance in the film also requires special mention.

Gulzar had given her a different identity in the films Khusbu and Kinara, opposite Jeetender. In Kinara, 1977, her husband Dharmender was killed in a road accident aftrer his car struck Jeetender’s car. She was completing the research paper that was left incomplete by Dharmender and in that context told her story to Jeetender not knowing him to be the person who was responsible for her husband’s death. The story has a number of turning points including the point where Hema Malini came to know about the reality and fell down and lost her eyes. In the story she displayed the character of a classical dancer and the songs composed by RD Burman and sung by Bhupinder Singh and Lata and the dance performances were excellent, including songs like “koi nahi hai mera”, “ek hi khwab kaibaar”, “naam gum jayega”, “meethe bol bole”, etc. She formed a legendary romantic pair with her husband Dharmender and both of them provided everlasting hits like Jugnu, Burning Train, Raja Jani, Dream Girl, to mention a few. She had created a trend which was followed by other South Indian actresses like Jaya Prada, Sri Devi, and others followed. Actresses of the new generation should learn from her performances and get inspiration for better performances in future.

Article By: Supriya Chatterji.
Posted by Souvik Chatterji at 10:04 AM

Hema Malini was brilliant in her performance in the films Paraya Dhan and Abhinetri. She had beautiful eyes, good height and charming screen presence in addition to her dancing skills.
Rumi Chatterji

Hema Malini hadprovided life-time performance in the film Kinara.she had shown her choreographic skills both at the time when she had her eyes and also when she became blind. She could blend both her glamour, dancing skills and acting skills in the film.
Souvik Chatterji.