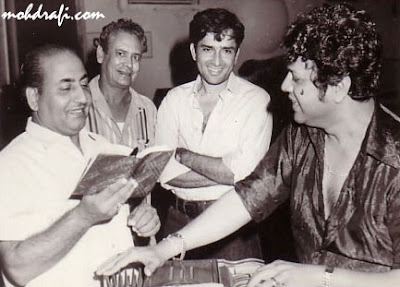 Renowned poet and lyricist Hasrat Jaipuri was born on 15th April, 1922 as Iqbal Hussain. In 1940, Hasrat Jaipuri came from Jaipur to Mumbai. Prithiviraj Kapoor heard him in a mushaira and recommended him to Raj Kapoor when he was making the film Barsaat.

The epic combination of Hasrat Jaipuri and Shankar Jaikishan started from Barsaat. The first 2 songs written by him became super hit namely “jiya beqarar hai” and “chor gaye balam”. The pen of Hasrat Jaipuri glorified RK Films and other bollywood films for the next 30 years.

Rafi, SJ and Hasrat Jaipuri was an equally brilliant combination like Shailendra, SJ and Rafi. Hasrat’s song sung by Rafi titled “teri teri pyari pyari surat ko” in Rajender Kumar’s film Sasural became super hit. In Shammi Kapoor’s Junglee almost all the songs sung by Rafi became immortal hits. In that list, Hasrat’s song “ehsaan tera hoga mujhpar” touched the souls of music lovers all across India. The song was sung by Rafi and Lata and both the versions were very melodious.

Raj Kapoor’s greatest hit film in his illustrious career remained Sangam. In the film Hasrat Jaipuri’s words “yeh mera prempatra par kar” sung by Rafi and picturised on Rajender Kumar had remained immortal. Hasrat Jaipuri wrote it for a girl named Radha. Raj Kapoor kept the name of Vaijayatimala Radha in the film Sangam. Rafi’s voice at the end of the film brought tears in the minds of the audience with the words “kitum nazaar na hona” when Raj Kapoor and Vaijayantimala immersed the ashes of Rajender Kumar in Prayag Sangam at the end of the film.

Hasrat Jaipuri died in 1999. One article is too small to highlight the works of the legends Hasrat Jaipuri, SJ and Rafi. In fact Hasrat Jaipuri worked with other composers of the golden age as well. But the songs written by Hasrat Jaipuri for Rafi which were composed by Shankar Jaikishan still stand out as the most romantic masterpieces in the history of bollywood cinema.
Posted by Souvik-indrajalik at 8:46 AM