Expectation from the film Pyar Impossible. 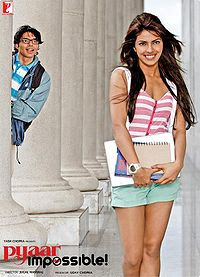 Expectation from the film Pyar Impossible.

The viewers of bollywood films have a lot of expectation from the film Pyar Impossible. The film had been written and produced by Uday Chopra.

It has been an adaptation of the British film Notting Hill, in which Julia Roberts and Hugh Grant gave brilliant performances. The main reason for the attraction to the crowds is obviously the presence of Priyanka Chopra.

In this film Priyanka Chopra had acted opposite Uday Chopra and Dino Morea. Priyanka Chopra had given hits after hits in the last 2 years and had been used by different directors including Rakesh Roshan, Madhur Bhandarkar, etc. So her presence had added colour in the film.

The story of the film was related to the love story of Priyanka Chopra with her lover boy. The other factor which had raised a lot of curiousity in the minds of the viewers which include the presence of the director Jugal Hansraj, who tried to direct the film in his own style.

It had been produced by Uday Chopra and the music had been composed by Salim Sulaiman. The only worry is in terms of viewers indifference towards love stories. If we look back at the hit films in the last 3 years, we will find that most of them having stories involving laughter had done better business than the other ones.

Munnabhai MBBS, No Entry, did great business while Love Story 2050, Chandni Chowk To China did very average business. It is difficult to predict the success of the film. If it does moderate business it is more than enough.
Posted by Souvik Chatterji at 10:08 AM