Rajashree - the classical dancer of the 60s. 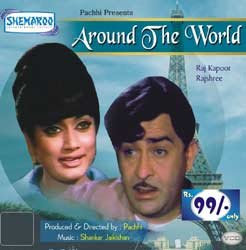 Rajashree – the classical dancer of the 60s.

Rajashree, daughter of famous director V. Shantaram and classical dancer Sandhya, made a notable contribution in bollywood films in the 60s. She faced very strong competition from Vaijayantimala, Sadhna, Asha Parekh, Saira Banu, and yet maintained her stardom in hit films opposite leading stars of bollywood films.

Most part of the film was picturised in Jammu & Kashmir, and the songs of Rafi like “lal chadi”, “tumse accha kaun hai”, etc., became super hit. Rajashree had adequate classical training for exhibiting her dancing skills which she showed in the song “mere sang ga gunguna”.

The second part of the film dealt with the conspiracy committed against Shammi Kapoor, and her marriage with Shammi Kapoor got stuck due to those reasons. Over all her performance was very impressive and the film became super hit.

The same combination was again successful in the film Brahmchari. Shammi Kapoor ran an orphan house where the children were brought by him and he did not marry to help out the orphan children in the film. Rajashree intereacted with Shammi Kapoor in the film and for different reasons, Shammi Kapoor taught her to be modern and arranged her marriage with Pran.

After knowing that Pran had a very bad reputation in society and was also involved with Mumtaz, the marriage was cancelled and Rajashree was saved at the end of the film. Again the scintillating music of Shankar Jaikishan amused the viewers. All the songs of Rafi including “aajkal tere mere pyar ke charche”, “chakke pe chakka”, “dil ke jharoke me tujhko bithakar”, “mai gayun tum so jayo”, became landmark hits in the late 60s.

Rajashree was extremely successful opposite Raj Kapoor in the film Around the World. Raj Kapoor played the role of an innocent person who had to travel all across the world, first as a worker in a ship and then after joining different forms of employments. He was attached with Rajashree during his travel to different places. The fantastic location of West Indies, United States, etc., was balanced by classic music of Shankar Jaikishan once again. Mukesh’s songs “kitna akela hoon mai”, “duniya ka sair kar lo”, “chale jana” became landmark hits in the late 60s.

Rajashree acted in successful films opposite the other leading stars of bollywood films in the 60s, including Biswajeet, Joy Mukherjee, Jeetender, to name a few. Most of those films including Sehnai, became successful. Rajashree faded out from the industry in the 70s. Her films should be restored for the next generations.
Posted by Souvik Chatterji at 1:41 PM

Excuse me Rajashree is the daughter of V Shantaram and Jayashree Shantaram ( not Sandhya !!)

Thanks a lot, Vishwanathanji for reminding about Rajashree's performance in the film Geet Gaya Patharone.
She did excellent job along with Jeetender.
Souvik Chatterji.