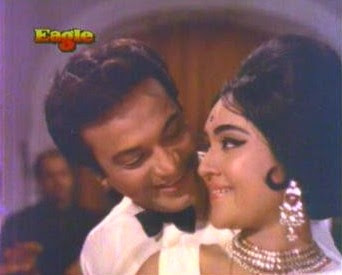 Uttam Kumar, the greatest superstar of Bengali films also acted in landmark bollywood films. His first film Choti Si Mulakat, opposite Vaijayantimala was based on the Bengali film Agni Pariksha where Suchitra Sen played Vaijayantimala’s role. She was married to Uttam Kumar at an early age and the marriage was not accepted by the society. After a long period of time Uttam Kumar met her and she again got attached with Uttam Kumar and hesitated whether to marry him or not. At the end of the film the fact was unfolded that Uttam Kumar was the same person who was married to her at her early age. The music of Shankar Jaikishan was very impressive including songs of Rafi like “choti si mulakat”.

Uttam Kumar also acted opposite Sharmila Tagore in the film Amanush and Anand Ashram. Both the films were directed by Shakti Samanta. In Amanush Uttam Kumar was a rich person who was falsely implicated by Utpal Dutta in a case that led to misunderstanding with Sharmila which was solved eventually. In Anand Ashram Sharmila , the wife of a doctor played by Uttam Kumar while giving birth to his son played by Rakesh Roshan. The film involved the relationship of Uttam Kumar with his father Ashok Kumar who did not accept his wife and Uttam Kumar left his house. The father and son were united at the end of the film. Uttam Kumar kept his mark opposite successful bollywood actresses in the films he had done and the films should be restored for their strong story-base and powerful acting
Posted by Souvik Chatterji at 11:37 AM