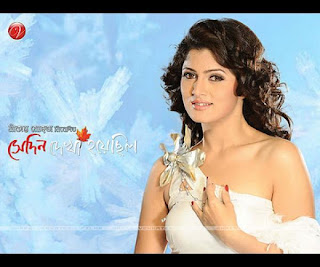 Srabanti Chatterjee and Ankush, the heroine and hero of the Bengali upcoming film Idiot stormed Zee Bangla Banglar Sera Poribar on 8th November, 2012. The film  is going to be released soon.

Srabanti Chatterjee, her husband Rajib Biswas formed one team. The other team was full of Ankush and others. Prasenjit Chatterjee the anchor asked Ankush about his entry into Bengali films. Ankush said that Idiot was his second film. He initially wanted to be a doctor and later loved films and came in this line.

Srabanti Chatterjee acted in many super hit films opposite Jeet like Wanted, Josh, etc. Her online chemistry opposite Jeet had been accepted by the Bengali audience. She also acted opposite other heroes like Deb and Soham.

Apurbo Roy came in the middle of the show to do some comedy. He said that he looked better aside Srabanti Chatterjee than Prasenjit Chatterjee. Ankush’s family won more points and money in the Katakuti Round. Srabanti Chatterjee’s family also did well in the Bong Connection and other rounds.

Prasenjit Chatterjee wished best of luck for the film Idiot and the stars and team of the film.
Posted by Souvik Chatterji at 8:54 PM