The nation remembers Guru Dutt on his birthday. 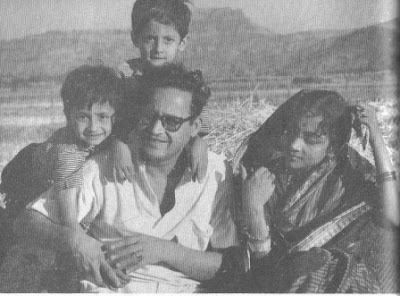 Guru Dutt, Geeta Dutt The nation remembers Guru Dutt on his birthday on 9th July, 2012. He had died more than 40 years ago, yet his reference comes whenever history relating to thoughtful films is revisited. Guru Dutt was innovative as a director and from the time he created Baazi with Dev Anand in 1951, he showed his spark. As an actor his films Aarpar with Shyama gave a new team in bollywood films with OP Nayyar, Rafi, Geeta Dutt, Johny Walker and others. The song in the film Aar Paar, released in 1954, namely “kabhi aar kabhi paar” became super hit. The other actress who was discovered by Guru Dutt included Shakila who acted in Aar Paar and CID. From that time onwards Guru Dutt created his identity in picturising song sequences and was regarded by the film community after Raj Kapoor. In CID, all the songs of the film like “ay dil mushkil jeena yahan”, “ankhon hi ankho me ishara ho gaya”, “leke pehla pehla pyar” became super hit. Johnny Walker became a leading comedian in the 50s, due to his brilliant relationship with Guru Dutt and Mohammad Rafi and their combination gave numerous hits for the next ten years. Guru Dutt worked with Raj Khosla in the film and he also learned the art of filmmaking to some extent from Guru Dutt. Mr and Mrs 55 was Guru Dutt’s super hit project opposite Madhubala in 1955. All the songs in the film became successful including “thandi hawa kali ghata”, “jaane kahan mera jigar gaya ji”, etc. Rafi’s songs for Johnny Walker and Guru Dutt like “sun sun sun sun zalima”, “muhobbat karlo aji karlo”, “dil pe kiya aisa jadu” remained everlasting hits and still is considered as some of the most innovative creations of OP Nayyar. Geeta Dutt sang many successful duets with Rafi in those films. The songs of the film 12 O Clock were also hit including “mai kho gaya” sung by Rafi. From 1957, the viewers saw thoughtful Guru Dutt in films like Pyaasa and Kagaz Ka Phool. Both the films were based on eternal truth. Pyasa was related to recognition of a poet in a materialistic world. Kagaz Ka Phool was related to story of directors and performers in celluloid, their rise and their fall due to ungratefulness of opportunists in society. The music composed by SD Burman in both these films were of high standard. Also the lyrics of Sahir Ludhiyanvi were very meaningful. The notable songs included “yeh mahalon yeh takhton yeh tajon ki duniya”, “sar jo tera”, “bichar gaya bari bari” sung by Rafi, “waqt ne kiya kya haseen sitam” sung by Geeta Dutt, to name a few. It was very unfortunate that Guru Dutt did not receive the filmfare award for the best actor for his thoughtful performance in the film Pyaasa. Guru Dutt and Wahida Rehman’s onscreen chemistry was accepted by viewers in the film Chaudavi Ka Chand. The title song “chaudavi ka chand ho, ya aaftab ho” sung by Rafi and composed by Ravi can be considered as one of the ten best ghazals composed in the history of bollywood music. Guru Dutt bought colour in the song sequence. The film did great business. It was listed in the top five grosser of bollywood after Mughal-i-Azam, Kohinoor and Barsaat Ki Raat in the year 1960. Guru Dutt as an actor did great job in films like Bharosa, Saheb Bibi Aur Ghulam, Saanz Aur Sawera, etc. His early demise in the mid-60s led to huge loss in the film industry as his works were filled with deep thoughts. The viewers pay respect to the departed soul on his birthday and want the restoration of his works to acknowledge his creativity as a director, producer and actor.
Posted by Souvik-indrajalik at 6:50 AM

Very well written article.Pyasa was really a great film,
I too have written in hindi and paid tribute to the legend.

Thanks Manch for the comments. Guru Dutt had been the greatest director of the millenium. His films are generally all classics.