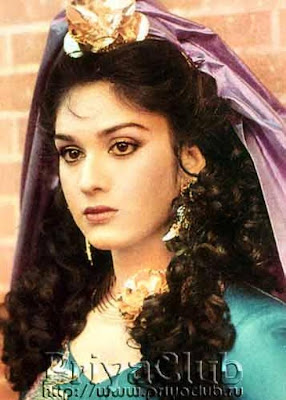 The viewers of bollywood films wish happy birthday to Meenakshi Sheshadri on 16th November, 2011. She had been one of the leading actresses of bollywood films of the 80s. She entered the film industry at a time when there was serious competition amongst the actresses in bollywood. Jaya Prada and Sri Devi established themselves as lead actresses and new stars like Madhuri Dixit and Juhi Chawla entered bollywood.

She started her career in Subhash Ghai’s film Hero. Meenakshi acted opposite Jackie Shroff in the film who also started his career with the film Hero. After that Meenakshi acted opposite all the leading actors of bollywood films. She was very successful in the film Meri Jung opposite Anil Kapoor. In that film Anil Kapoor being a lawyer contested against Amrish Puri in a keenly contested case.

Meenakshi was successful opposite Big B in the film Shahenshah. Big B played the role of a police officer who did his duty during the day and attached criminals at night with the name of Shahenshah. Meenakshi gave able lips in the song “jane do jane do mujhe jana hai”. Meenakshi acted in successful of Raj Kumar Santoshi one after the other.

She was at her best in the film Damini. In that film she had seen a girl being raped. When she went and gave her testimony before the court about the happening she was considered to be an insane person. But she did not care about the allegation and testified before the court about the happening. Sunny Deol and Rishi Kapoor also did extremely well in the film opposite her. Meenakshi could have won a national award for the brilliant performance in the film, had Dimple Kapadia not won it for Rudaali.

Sunny Deol and Meenakshi formed a deadly combination especially in the films of Raj Kumar Santoshi. Their other hit films included Ghayal and Ghatak which did fantastic business. In Ghayal Meenakshi played the role of a dare devil character, the journalist who did not fear to write the truth related to a corrupted businessman played by Amrish Puri. Sunny Deol was falsely implicated in a case and fled from the jail to kill Amrish Puri. Meenakshi also acted opposite other actors like Vinod Khanna. Even in less known films like Joshiley, Meenakshi Sheshadri did extremely well opposite Anil Kapoor. She had very successful opposite all the leading stars of the 80s and 90s including Rishi Kapoor, Anil Kapoor, Jackie Shroff, Sunny Deol, Big B and others.

Meenakshi also acted in South Indian films and was successful there too. She left films at a time when she was very matured. The viewers expect her to make a comeback in character roles in future.
Posted by Souvik-indrajalik at 6:26 PM